I’m Grateful I Got Divorced 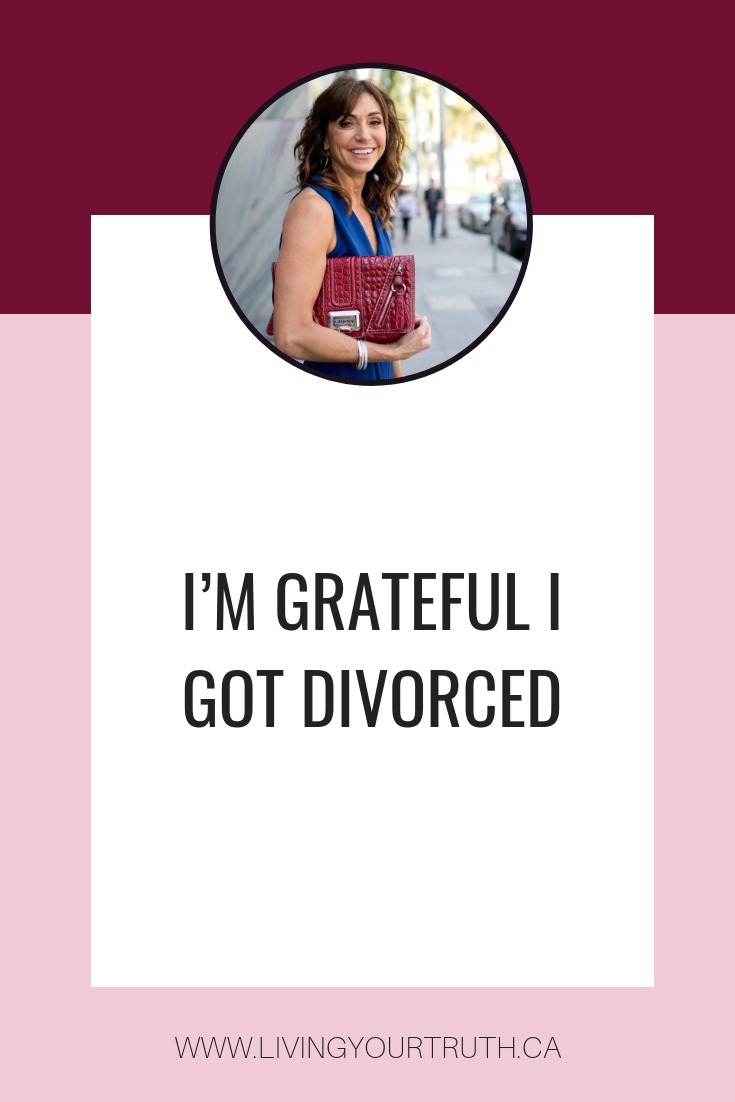 Never in my life would I think that I would be grateful to get divorced.

I mean seriously? What’s there to be grateful for? Well for starters, how about my self-esteem? How about not living in fear anymore? How about not wondering where he is or who he’s with?

Don’t get me wrong, my first divorce (yes I’ve had two) was devastating in so many ways.  Financially, I was bankrupt. I lost my house, my job, all of my money and even had to sell my car. And emotionally, well I was a freaking mess. My first husband was my true first love. I loved him and I loved him hard. So breaking up was not as easy as I thought, even though I knew I had to do it. He was an alcoholic and was an absentee father/husband. I suffered terribly from his addiction, as did my children. By far, that has been one of the hardest decisions I have ever had to make in my entire life.

Oh sure I can look back on it and tell you that it was the right thing now. I still kick myself for staying in such an abusive, toxic marriage, but I really felt stuck and was terrified at how I was going to get by with just my salary and no support.

But I remember one day asking myself if I could honestly live like this for the next 50 years and the answer was a resounding HELL NO!!! Of course it helped that he had been missing for 4 days again on one of his usual benders that were the normal course of our married life. The decision didn’t seem difficult.

So, the decision to leave him once and for all was made with huge trepidation, a ton of fear, a lot of tears, but also some excitement.

Pump the breaks… Excitement? Yup, that’s right. I was excited to see what living a normal life looked like. I was excited to not have to worry day in and day out about where he was or what he was doing. I felt true excitement about the fact that I didn’t have to cancel credit cards because in his drunken stupor he lost his wallet….again.  The excitement was pulsating through my veins because I was finally able to show myself and my children what a strong woman looked like and what having some peace in my life looked like after having lived in a sense of shame and hell for 13 years.

But, the truth is that the shame was there big time. I could feel the shame rising inside of me for the fact that I allowed myself to live and be treated like that for so long. Shame was inside my soul because I lied to family and friends about what a great marriage I had. Most importantly, I felt shame because I had brought children into such a dysfunctional, sad family.

The day I decided to leave was the best and worst day of my life. What followed in the next two years was a financial and emotional roller coaster hell that I wouldn’t wish on my worst enemies. I often wanted to just roll up and die. And if you’re experiencing divorce (or ever have), you know exactly what I’m talking about. I’m sure you can probably agree with me that getting out of bed was super hard. I also drank way too much, I started smoking, I stopped exercising, and I was in a full on raging depression.

I relived all the good times in my mind over and over again. They literally played like a broke record on repeat. There were a few, and honestly more bad than good, good times, so naturally I clung to those good times like a drowning victim hanging onto a life raft.  And then, one day, something happened. I woke up, disgusted with myself, and made a vow to get my shit together.

I stopped reliving the past, and I finally let it go gently. I stopped blaming myself for marrying a man that I knew on my wedding day was not right for me. I even started exercising again.  The smoke went out of the window, and I finally was learning how to love myself again. For so long, I felt like a piece of shit and something had to give.

These improvements took time and they definitely hurt like hell to overcome. But I did it. And trust me, Girl, there were times that I never thought I would get over the hurt, the pain, and the anger.

So today, I am grateful that I got divorced because I found myself once again. I became a hard ass determined woman. I became the best mother I could be to my kids. I got re-educated, started a new career, and most of all, started to like (and hell, even love myself) again.

None of that would have happened if I did not get divorced. My divorce allowed me to finally be the woman that I knew I always was, and I really fucking like her.

Let me ask you the question I asked myself 24 year ago…. Can you live like this for the next 50 years?

Now go do what you know needs to be done. You’ve got so much support in your corner it’s not even funny! Get ‘em, girl.